The Radical Left has One Common Goal

Man thinks he knows more than God. He thinks he is enlightened, progressive, and has the ability to bring in new systems that are better. 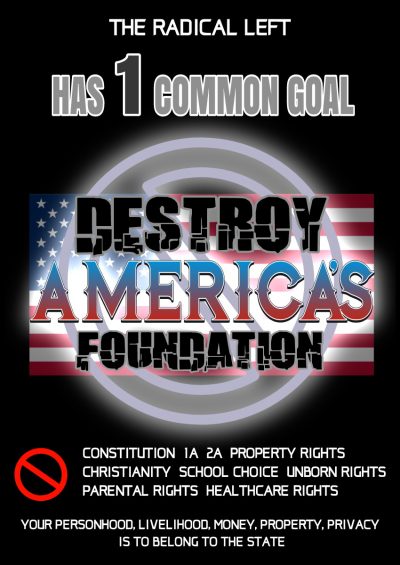 God uses broken people to accomplish His purposes. The founding documents of America were inspired by God and instituted by men. Even while the founders were not perfect in righteousness, nor even born-again Christians, they knew the Ten Commandments and purposely based our nation’s foundation on God’s precepts. Our Constitutional Republic, a self-governing system, was thoughtfully considered and debated over years, not a weekend or two. It is the most well-thought-out system of government in history. It is based on virtue. Without virtue it fails.

Now we are in an age where God’s precepts are not just being eroded, they are being eradicated at any cost. Man thinks he knows more than God. He thinks he is enlightened, progressive, and has the ability to bring in new systems that are better. In the end they fail and destroy the lives of many, because man, without God, is selfish and self-absorbed.

Without God we become nihilists, and this is today’s culture. Mass abortion, suicides, child sex trafficking, mass shootings, etc., are obvious signs of a lost culture desperate for identity, yet God is pushed away even more vehemently. Political leaders will not fix it, but they can make it worse.

Decades of eroding the foundation of America and ushering in a Godless society of communism/globalism is showing. Those who want it are emboldened. How will those who want freedom and virtue respond?

Then you will call on me and come and pray to me, and I will listen to you.
Jeremiah 29:12
DailyVerses.net